skip to main | skip to sidebar

Too cool for school - spin your own light shows

**Congratulations to Jax for winning a Fyrflyz! Jax, please email shipping info so that your prize can be shipped!**

My nephews and nieces live in Africa – the other side of the world from us. I adore them all and lament the fact that they are growing up so far from us. We stay in touch via Skype, but wonderful as this, it’s never as good as the real thing.

In an effort to compensate for the distance between us, I am forever shipping off little care packages, and I’ve since developed a reputation as the ‘cool aunt’ – the one who sends the best Christmas and birthday gifts – shhhh, don’t tell the other aunts!

Keeping the ‘cool aunt’ status has become increasingly difficult as the nieces and nephews grow older and their gift needs become more complicated than a quick trip to the Disney store.

My oldest nephew celebrates his seventh birthday early next month, and up until last week, I’d found nothing cool enough – or compact enough – to ship quickly and relatively inexpensively. Then, just when I was despairing, the perfect cool toy arrived for review on my doorstep.

Meet Fyrflyz, a neat spinning toy that creates light shows in the palm of your hand! Pudding Pie was entranced by this fun little toy – and her dad even more so! 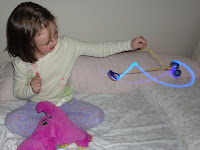 We took our Fyrflyz outside after dinner and had a blast making awesome rings, figure eights, and other light shapes with the Fyrflyz. (See very amateur movie clip at the end!) And, as evidenced in this photo, Pudding Pie was happy to continue the fun indoors, although the effect is not quite as dramatic!

Not only is my nephew going to love this toy, I am quite sure he is also going to be one of the first kids in his school to have a Fyrflyz – which will significantly elevate my ‘cool aunt’ status – love it!

Fyrflyz are available at Toys 'R Us stores.

*If you'd like a chance to create your own Fyrflyz light shows, leave a comment on this post by midnight, September 28th and you'll be entered to win a Fyrflyz for yourself!

I wrote this review on behalf of Mom Select and Fyrflyz, and received items to facitlitate the review.
Posted by Belinda at 8:30 PM 1 comment:

A little help keeping the odors out 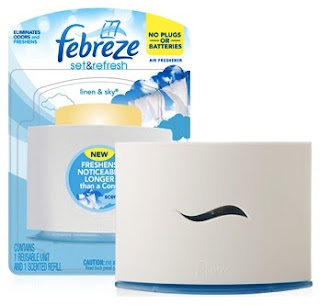 Although our home can lean toward the messy side, I strive each day to hold the line between ‘clean messy’ and ‘not-clean messy’. I keep up with laundry, bleach out the bathrooms, do the dishes, take out the trash, and so on. This way, when we are lucky enough to have friends over, I am not completely humiliated – although they may still recoil at the mountain of laundry waiting to be folded, or they may risk breaking their neck on the stuffed animals, barbies, books, puzzles, etc., that line their route to the sofa.

There is one vexing issue I’ve struggled with: The litter box that belongs to Precious, four-legged queen of our home. This necessary item is to be found in our entranceway, directly beside our front door – the very first thing guests lay eyes on when welcomed into the home. Not ideal, I know, but there really isn’t any other spot in our cozy apartment to put the thing. Believe me, I’ve tried various locations. 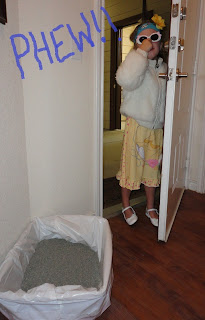 Precious is admirably fastidious; she uses her latrine with enthusiastic frequency, and while this is great, it does mean that the entrance area is often not the most fragrant zone of the home. To combat this issue, I am generous in my applications of various disinfecting sprays, but I’ve still had more than one UPS or Fedex guy come knocking and then pale a little and hastily retreat after the olfactory assault.

Short of looking forward to the day when we move to a slightly less cozy dwelling and I gain a few more location options for Precious’ potty place, I’d despaired of finding a fix to my dilemma – and resigned myself to being the scourge of package delivery folks. 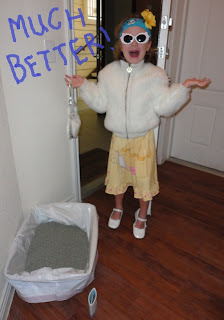 Lately, however, things are looking up. I’ve discovered the magical Febreze Set & Refresh air freshener. Positioned beside the aforementioned latrine, this small but dynamic little unit has made my entrance area a blissful place, with a lingering aroma of Linen & Sky - far more pleasant than what lingered there before.
Pudding Pie demonstrates the delighted reaction of visitors now that we have Febreze Set & Refresh!

Making this unit even more attractive is this: the freshener lasts up to 30 days and there is nothing to plug in, nor does it need batteries. What’s more, the new Dual Refills allow you to try other fragrances without having to throw away the entire Set & Refresh unit. If I should tire of Linen & Sky, I can choose from several other scents, perhaps Hawaiian Aloha or Spring & Renewal. And for those days when I seriously question why I choose to reside with a creature who cannot flush her business like the rest of us, I’m going for the Advanced Odor Eliminator scents.

I wrote this review while participating in a blog tour by Mom Central Consulting on behalf of Febreze and received a promotional item to thank me for taking the time to participate.
Posted by Belinda at 9:28 PM No comments:

This magical Zhu-niverse enchants and entertains 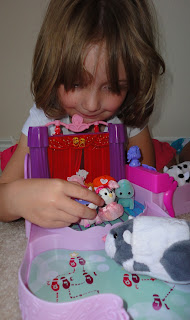 There’s nothing like a baby to bring out the ‘mama’ in my daughter. She may be just 4 years old, but the nurturing force is strong with her. When a box containing an abundance of paraphernalia intended for our upcoming ZhuZhu Babies-themed party was deposited outside our front door, I got a glimpse of Pudding Pie’s motherly ambitions.

I had unwisely allowed her to persuade me into opening the box early so that we could have a little peek at the contents, even though she knew our party was still a few days away. This was a mistake. Once the box was opened, she was a basket case, first giddy with excitement and then plunging into sorrow (think body-wracking sobs) and frustration a the thought that she couldn’t immediately begin to care for the babies.

Pudding Pie didn’t let up,and  I found myself looking forward to the party more than she was – just so I could hand over her ZhuZhu Baby. On party day, I realized these small creatures elicit the same response from all who own them. Our age range 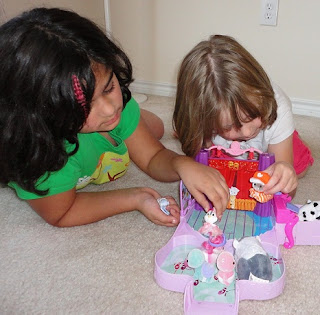 was between 9 and 3 years old, and the ZhuZhu babies were a hit across the board – they even have their own name, birthmark ,and birthday! One of our guests even brought along her own ZhuZhu Pet so that she could meet the new baby!

Our package included a Dance Recital playset, which fascinated all – adult moms and ZhuZhu moms. Once the playset was set up, we positioned ‘Moo’, the ZhuZhu Pet we received with the babies, in her hub in front of the piano, and while she ‘played’, the ZhuZhu babies ‘performed' – we were entranced!

Of course, one of the best things about having a baby is getting to dress her. The Dance Recital set came with dress-up clothes for the babies, and we also received a couple of outfits – perfect for the numerous outfit changes a baby apparently needs. Our ZhuZhu Party Pack had some great game ideas, but we didn’t play as many games as I’d hoped because ou 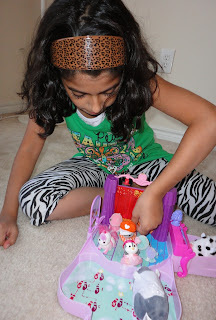 r party guests were so enamored with dressing up their babies that it was next to impossible to drag them away for some more structured play.

We did do a variation of a game called Diaper Dash, which was pretty cute. The moms used toilet paper and scotch tape to create ‘diapers’ for the kids, we then lined them up at one end of the living room and had them crawl as fast as they could across the carpet, retrieve their ZhuZhu Babies and crawl back to where they started from. The original game calls for the kids to be in teams, which I imagine would be fun, but our age range made the relay idea more challenging.

I now understand that once you’ve entered the Zhu-niverse, there is no turning back. Pudding Pie continues to be enthralled by these pint-sized creatures. She scored an extra ZhuZhu Baby after the party and officially entered nurturing heaven. You’d think that'd make her content with her lot (after all, she also got to keep the ZhuZhu Pet and the Dance Recital playset), but she now has her sights set on the ZhuZhu Babies Triplet Bedroom playset, and because it sleeps three of these little characters, she will of course need another ZhuZhu Baby. Santa has his work cut out for him.

Cuddle Cottage was chosen to host an in-home party for ZhuZhu Babies through Mom Select , and was given the materials and samples to do so.
Posted by Belinda at 8:38 PM No comments:

Newer Posts Older Posts Home
Subscribe to: Posts (Atom)
Welcome to Cuddle Cottage - I'm delighted you stopped by! This is where I write about the light of my life, review products and promote bloggy contests.